The lovely chill On The Table along Pasir Panjang Road

Happy New Year everyone! For my first post of 2015, I have decided to share about a cafe I recently visited (as I love cafes, and also, in case anyone needs inspiration for a place to hang out this weekend).

What we had at On The Table

Been wanting to but still haven’t been to the popular Lola’s Cafe in Kovan because of the location, so when I heard that they had opened a sister cafe in Pasir Panjang, I made a mental note to go and try it sometime.

Greeted by a spacious, warm setting upon entering the cafe

Its sister cafe On The Table is a very spacious, bright cafe with yellow chairs, in a fairly quiet suburban area but near some office spaces. The decor of unfinished walls, pillars and exposed lightbulbs give it a slightly industrial feel, nicely contrasted by the Vintage metal railings and British/European-style chalkboards.

I can’t really make comparisons as I haven’t been to Lola’s, but from what I have heard/seen, this seems like a more relaxed, less crowded space than the original spot.

Having heard so much about Lola’s Honey Paprika Wings, I just had to order that. The version at On The Table was called Crispy Honey Wings ($10) though, so I am not sure if it is exactly the same.

The wings arrived at our table with an enticing fragrance and were crispy as promised, with the outer layer tasting of delicious sweet honey. The meat was also quite tender and juicy. Not quite the best chicken wings I’ve had, but pretty good.

What a decadant croissant… but it was yummy

What I really liked though, was the Ultimate Croissant ($13) – stuffed with cheese, warm fluffy scrambled egg, thick layers of ham, and bacon. Accompanied by a balsamic vinegar dressed mesclun salad, which I thought was a nice touch. 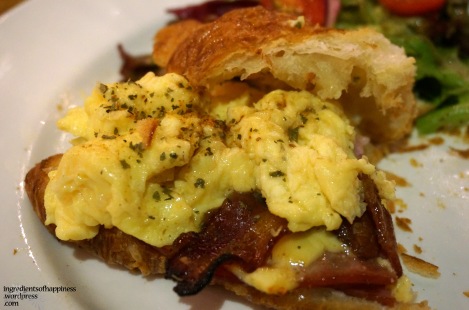 Mmmmm look at the generous filling

Overall the dish was tasty and satisfying – the croissant was crispy on the outside and soft and buttery inside, and combined with its rich, savoury contents, was a delight to consume. 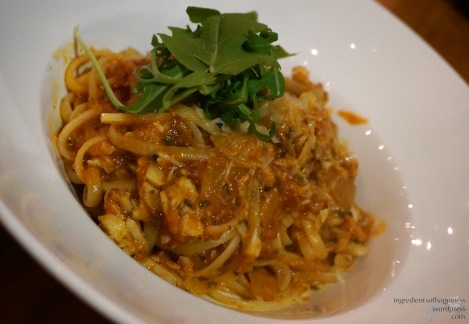 We also tried the Tomato Swimmer Crab Linguine ($16), which you can have either spicy or non-spicy (we opted for slightly spicy). It was not bad, with decent flavour, visible crabmeat chunks and thick enough sauce.

The noodles were not the chewy, springy ‘al dente’ sort, which was fine with me as I like my pasta to be slightly softer – but this might not work for everyone.

My skinny cappucino On The Table, haha

I found the cappucino ($5) that I had rather milky though, without the usual level of coffee kick and taste that I prefer.

Happy us against a nice colourful backdrop of beeers

All in all, my colleague V and I enjoyed the food and would likely come back again if we have the chance!

Tempting cakes on the counter but we were too full

Their big breakfast looks appealing and they had a variety of wonderful looking cakes and ice cream, so would like to try some of these the next time.

Oh and it was pretty near and easy to find from Pasir Panjang MRT too!

On The Table
118 Pasir Panjang Road

Open from Tuesdays to Fridays from 11am to 10pm and Saturdays and Sundays from 10am to 10pm. Closed on Mondays.

One response to “On The Table, Pasir Panjang”