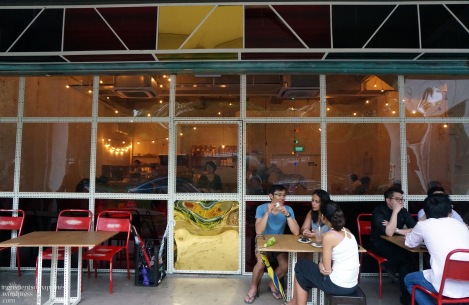 With quirky tinted windows and a deconstructed feel

Jalan Besar is fast becoming a hipster area for cafés, bakeries and quaint little eateries. With Loysel’s Toy first opening at a little industrial building in the Lavender area around 3 years ago, to the popular Chye Seng Huat Hardware that popped up last year, and many more.

The Bravery is a new kid on the block, joining the growing café scene there just a few months ago. It is an offshoot of The Plain, a 3-year old Melbourne inspired café at Duxton with clean décor and a chill feel which seems to be more about the coffee and keeping the food offerings fairly simple.

And the branch didn’t fall far from the tree, it seems. Having a slightly more raw, grunge-y feel with deconstructed walls, smattering of light bulbs on strings, metal chairs and the like, The Bravery also gives off a very relaxed, hip vibe – a place for people to enjoy a nice chat over a cup of coffee.

Food offerings were fairly simple and straightforward, it was mainly either eggs, toast or sandwiches. Besides the special of the day, which when we went on a Sunday earlier this month was a rather appetizing sounding Cajun Chicken Wrap (S$10), so kindly described to us by a polite and conscientious young male server.

The bf’s sunny side ups with turkey bacon

We decided to go with the classic choices though, with Z picking Eggs on Toast (S$8), eggs done sunny side up topped with lamb sausages (+S$4) and turkey bacon (+S$3.50) and myself the same dish but done poached and topped with smoked salmon (+S$5) and avocado (+S$2.50).

Unfortunately I had a bit of a flu that day, so was not able to fully taste my food – but what I could taste was alright, and I was overall quite satisfied with my well poached runny eggs, good fresh smoked salmon and avocado, and yummy buttered multigrain toast.

Z was not too pleased though, as he felt the turkey bacon was kind of dry and unappetizing and was annoyed that the place didn’t serve chilli sauce (though I did try to tell him that it’s not really THE norm to have it… but anyway). 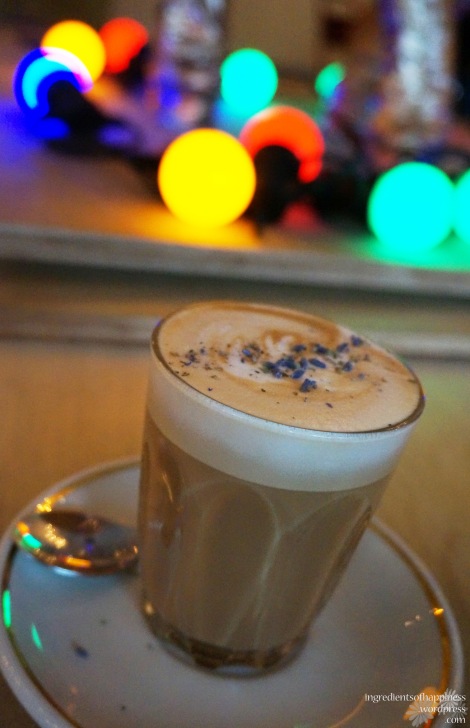 As for the coffee… perhaps it’s just me, but I discovered at The Bravery that lavender flavoured coffee really wasn’t my kind of thing. To me, the flavours just didn’t gel – the soothing taste of lavender and the slightly bitter punch of coffee.

The bf’s mocha was alright, though could have been a bit stronger I felt. But I suppose the coffee here is meant more for you to sip and enjoy, rather than to wake you up.

Inside The Bravery Cafe

Overall a nice place to relax over some nice coffee and simple, healthy-ish fare (I found the food less oily than some of the other cafes out there, plus they don’t douse the eggs in hollandaise here and PLUS they use multigrain instead of white bread), but I guess it’s not for everyone (Z didn’t like this place at all).

Found the prices pretty reasonable too, and the beef ciabatta looks really delicious so perhaps I have to make a trip down again… but with someone else I suppose!

Open from 8am to 8pm on all days except Tuesday.

Today, I'm exhausted. After a week of 1,000+ minutes of #dancing, 75 minutes of pretty intense yoga, 200+ minutes of scratching my skin till it's broken and bleeding, XXX minutes of being scolded by strangers (indirectly, don't ask), I'm taking a rest tonight. Brb, don't look for me unless it's urgent or you have ice cream to give me. 👋😛🍦 . Inspired to up my #selfie game by @mj_piaopiao 😂😝 (though yes I know there's this ugly shadow over my face but my hair is the nicest here out of the 3 I took hurhur 🤭) . #Resting #MeTime #ImSoTired #Weekend #Sunday
Amidst all these lovey dovey Valentine's Day posts I'm seeing all over my feed this morning, here's one from me - of a rather spontaneous, last minute #dinner date with a lovely lady. 🤗 Thank you @smallsamshots for always being so sweet and supportive and a voice of reason, in good times and bad - and for helping me to not eat alone in a sea of couples last night hahaha. 💛 #Friday #Friends #FoodPics #Yummy #Burpple #SgFood #SgFoodstagram #Food #Instafood_Sg
So, as a follow up to my IG/FB story, here's what I was stretching for... a little traditional #bachata shine by @michellewoopm feat. the Michelles of @ZiggyFeet! Lol 🤗 Thankful to Michelle for always being so generous with sharing her #dancing knowledge with us... I think this style is really fun too, just gotta learn how to do it better! Because like you know, the girl in the grey top... is flailing her arms about and bouncing around a tad too much... 😂😅 Better #video of these shines (with @seewaiching) is up on her page too if you're interested (I just didn't wanna repeat again here hehe)! 😁 . 🎥: @mmmichaeltan . 🎶: @raulinrodriguezrd #BachataDancing #BachataShines #BachataLadies #InstaBachata #BachataLovers #ZiggyBachata
It's a #BubbleTea kinda day. ☺️☺️ . #Yummy #Chichasanchen #SgFood #SgFoodstagram #Instafood_Sg #Burpple
Good #friends, fresh #seafood and a pretty multicoloured #unicorn hairband. 😍😅 What more can a girl ask for? Thank you @shashapauline and @sandyleong29 jies for pampering us blur block babes @lorna_jazz hahaha ❤️ . #CelebrateBirthdayFor2Weeks (@maxsensual where is my lapdance video 😂😅) #Fun #Wefie #Food #Dinner
So... I guess we all have good taste?? 😏👌 This team attire was 100% coincidental lol. 😅 Also, dressing alike apparently also makes us extra excited and crazy haha (watch till the end)! #video from yesterday's training~ #ZiggyFeet #ZiggySalsa #Salsa #Dancing #MyDanceLife #Ootd #Weekend