I think this has probably been blogged to death in the last couple of days, but I’d like to post about it anyway, because I AM SO EXCITED about this!!!

Just yesterday, Michelin-starred chef Gordon Ramsay accepted a challenge issued to him by SingTel and the people behind these seven well-known food blogs in Singapore – Daniel’s Food Diary, Keropokman,  SuperFineFeline,  HisFoodBlog, ieatishootipost, Camemberu and Melicacy. The challenge is to pit his skills against the top 3 hawkers in Singapore (determined through public voting of 12 pre-selected hawkers based on a number of factors including their ratings on HungryGoWhere and The Business Times’ Knight Frank CEOs’ Hawker Choices, Makansutra etc) in a culinary contest.

The challenge is said to have arisen due to a recent hot topic discussed at HungryGoWhere about our local hawker food not receiving global recognition, such as Michelin stars. 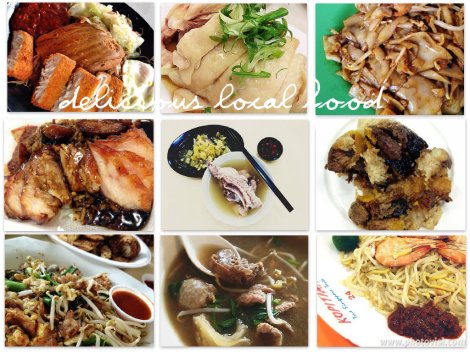 I think this is a GREAT idea – having a face-off in culinary styles which could not be more different, in a food genre that is pretty much still unknown to the world. It would be fantastic to finally take Singapore food to an international stage and give it more credit, that it deserves. There is so much more to our cuisine than just “Singapore noodles” folks.

So come July, after the top 3 hawkers have been determined through voting at the Hawker Heroes website, Gordon Ramsay will come to Singapore and battle it out with them.

I for one, am going to try some of the 12 hawker heroes finalists and then cast my vote before the poll closes on 2 July at 11.59pm! And there are prizes to be won as well.

Perhaps you should vote too? 😉

Today, I'm exhausted. After a week of 1,000+ minutes of #dancing, 75 minutes of pretty intense yoga, 200+ minutes of scratching my skin till it's broken and bleeding, XXX minutes of being scolded by strangers (indirectly, don't ask), I'm taking a rest tonight. Brb, don't look for me unless it's urgent or you have ice cream to give me. 👋😛🍦 . Inspired to up my #selfie game by @mj_piaopiao 😂😝 (though yes I know there's this ugly shadow over my face but my hair is the nicest here out of the 3 I took hurhur 🤭) . #Resting #MeTime #ImSoTired #Weekend #Sunday
Amidst all these lovey dovey Valentine's Day posts I'm seeing all over my feed this morning, here's one from me - of a rather spontaneous, last minute #dinner date with a lovely lady. 🤗 Thank you @smallsamshots for always being so sweet and supportive and a voice of reason, in good times and bad - and for helping me to not eat alone in a sea of couples last night hahaha. 💛 #Friday #Friends #FoodPics #Yummy #Burpple #SgFood #SgFoodstagram #Food #Instafood_Sg
So, as a follow up to my IG/FB story, here's what I was stretching for... a little traditional #bachata shine by @michellewoopm feat. the Michelles of @ZiggyFeet! Lol 🤗 Thankful to Michelle for always being so generous with sharing her #dancing knowledge with us... I think this style is really fun too, just gotta learn how to do it better! Because like you know, the girl in the grey top... is flailing her arms about and bouncing around a tad too much... 😂😅 Better #video of these shines (with @seewaiching) is up on her page too if you're interested (I just didn't wanna repeat again here hehe)! 😁 . 🎥: @mmmichaeltan . 🎶: @raulinrodriguezrd #BachataDancing #BachataShines #BachataLadies #InstaBachata #BachataLovers #ZiggyBachata
It's a #BubbleTea kinda day. ☺️☺️ . #Yummy #Chichasanchen #SgFood #SgFoodstagram #Instafood_Sg #Burpple
Good #friends, fresh #seafood and a pretty multicoloured #unicorn hairband. 😍😅 What more can a girl ask for? Thank you @shashapauline and @sandyleong29 jies for pampering us blur block babes @lorna_jazz hahaha ❤️ . #CelebrateBirthdayFor2Weeks (@maxsensual where is my lapdance video 😂😅) #Fun #Wefie #Food #Dinner
So... I guess we all have good taste?? 😏👌 This team attire was 100% coincidental lol. 😅 Also, dressing alike apparently also makes us extra excited and crazy haha (watch till the end)! #video from yesterday's training~ #ZiggyFeet #ZiggySalsa #Salsa #Dancing #MyDanceLife #Ootd #Weekend