Sometimes, I find it a tall order to search for and decide on the right place to take your loved ones to for a good meal. This was another one of those times. I was looking for good Chinese restaurants to celebrate my dad’s birthday and was running out of ideas. So then I heard that Summer Palace at The Regent Hotel is pretty good, and so decided to give it a try. We tried two different tasting menus – at $62++ and $68++ per pax, it seems a bit costlier than the usual Chinese fare, but comparable to the prices for such sets at other upmarket Chinese restaurants.

The first thing that struck me as different was that they placed each dish in individual portions – which was classy and hassle-free, but it did take away a bit of the charm of communally sharing food. Not that I’m complaining. I think that they prepared the amount and interval of the dishes very well though, such that at the end of it we had the perfect after meal feeling – satisfied but not too full. 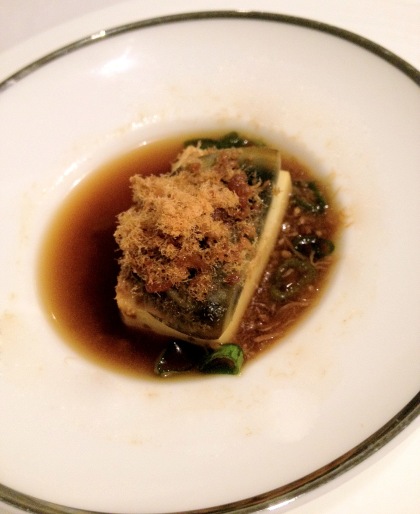 A little amuse bouche to tease the palate

Interestingly enough, this restaurant also serves up an amuse bouché prior to the meal. That night, it was a simple century egg on tofu garnished with pork floss. I think I won’t describe in detail every single dish except those which stood out for me, as they will all get a similar description – the dishes all had a superior, refined quality to them, and were tasty without being too overbearing on flavours.

The amuse bouché was followed by a starter plate of roast pork, soft shell crab garnished with pork floss and wasabi mayo prawns. This was light and delicious – the pork was crispy on top and not too fatty inside, the soft shell crab combined with the floss made for interesting flavour and texture, and the prawn was firm and enhanced with a slightly heated kick. And next were the fried shark fin and xiao bai cai soups, which were also light and flavourful. I didn’t try much of the former though but I remember it being quite interesting.

For the main dishes, the scallop and asparagus with XO sauce was really delicious, though the portion seemed a bit small visually. The scallops had just the right amount of chewiness and absorbed the XO sauce perfectly. The enoki mushrooms also added to the delightfulness of the dish. The steamed crayfish in garlic was not bad; the sauce light and nothing much to shout about, but it was fresh at least. The next two were vegetable dishes – quite normal, but I felt that the sauce was quite well done – thick and bursting with flavour, coating the vegetables and other ingredients (one with beancurd skin and mushrooms and one with a mini abalone and sea cucumber) with delicious goodness. 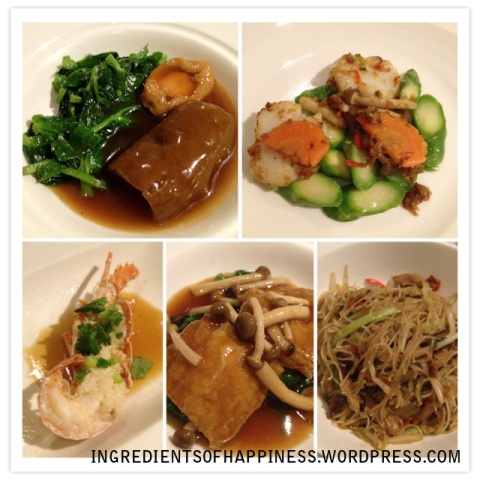 And the fried duck beehoon – oh my goodness. I have no idea what they did to this but it was soooooo good. It was kind of like flavours dancing in my mouth or something – the rich burst of savoury juice from the duck just went so well with the taste of the fried beehoon and shallots. Mmm. There was also some mushroom ee-fu noodles I think, but I was too enamoured by the duck beehoon to care.

On to dessert – it was another sampling platter like the starters – with a mochi, lemongrass jelly (that was so light and refreshing), and mango pudding. I don’t really remember exactly what the mochi and the mango pudding tasted like, but I think they was fairly okay. After this dessert platter, we were all nicely filled up but not too bloated.

Overall I feel that Summer Palace is a good place to have a pleasant, posh dinner with your family on special occasions (okay, even regular ones), if you feel like having relaxing ambience and delicate cuisine. We spent about $300 for 4 persons, so it was about $75+ per pax.